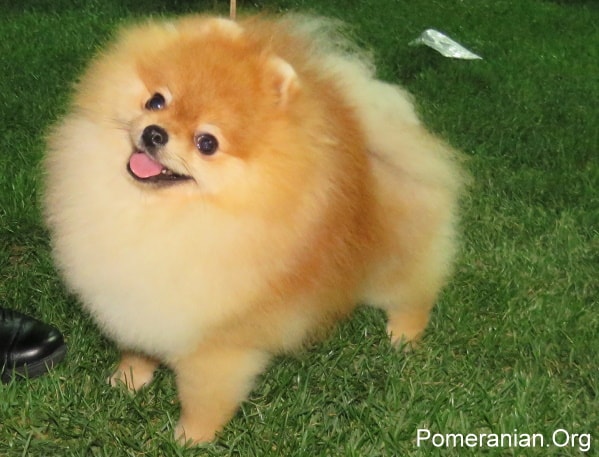 The Pomeranian dog breed is classified as a toy (meaning a small dog when compared to many other dog breeds). The AKC lists a total of 21 different toy breeds within the toy group; Pomeranians being one of the smallest dogs. However, within the Pomeranian family, there are lots that are bigger than average and some that are smaller than the norm.

In this article, I will:

The Kennel Clubs have standards for all purebred dogs. The range of sizes for small Pomeranians is very big. The Kennel Clubs influence the world of canines and these clubs include, the the AKC, FCI, CKC and the KC.

The weight range for a standard full-size Pomeranian is 3-7 lbs. (1.36 to 3.175kgs). For show Poms, they prefer the dogs to weigh 4 – 6 lbs. Lots of Pomeranians do match these criteria but there are also smaller and bigger Poms, which I’ll cover in more detail further down.

How Tall is a Pomeranian?

Although the dog’s height isn’t listed, most Pomeranians that are in the 3 – 7 pound category are usually about 20 cm tall. This measurement goes from the top of his shoulder blades (his withers) down to the floor.

Has more than 80 countries as members. They stipulate the height of a Pomeranian should be 18 – 24 cms. This is measured from the top of his shoulder (aka withers) to the floor. Weight requirement is 3 kilograms (6.6 lb). This figure is slightly less than that of Pomeranians in the AKC.

The German Toy Spitz size requirement is now 21cm  with a height allowance up to 24 cms. If he’s over 24 cm, they label him as a German Spitz Klein (or Miniature Spitz).

A Pomeranian or Zwergspitz (Dwarf-Spitz or German Toy Spitz) is small dog. Dogs taller than the required standard would not be within the Pomeranian (toy spitz) requirements, but could be reclassified as a German Spitz Klein (Miniature Spitz).

Is NOT connected in anyway to the American Continental Kennel Club. The CKC matches similar Pomeranian standards for weight and height as the AKC mentioned previously. Of course, there will be Poms that fall below or above the figures in the ideal standard size.

These measurements would mean Pomeranians would match the standards of the American Kennel Club’s preferred show Pomeranian size.

As previously stated, there are about 21 toy dog breeds and the Pomeranian is one of the smaller dogs. Other dogs that are also small on the scale of Toy breeds include:

The bone and body structure can vary and, in some cases, the Pomeranian dog weight will be lower than the minimum of 3 lbs. A Pomeranian fully grown, can weigh two pounds but it would be a rare find to see a Pom with a weight within the one-pound range.

NOTE: Even if you owned an adult Pomeranian weighing less than 3 pounds, it is NOT a “teacup.” Teacup, toy or miniature Pomeranians are NOT an acceptable variation or recognized breed.

Reputable dog breeders may occasionally get one puppy in a litter that’s smaller than the average size Pomeranian and that’s fine. However, anyone who is specifically breeding Poms to be much smaller than the breed standard is behaving unethically and without any care for the poor Pomeranian in question.

This form of breeding often condemns the dog to an increased risk of more severe health problems including a patella luxation and a collapsed trachea. His bones are more fragile and he needs to be protected from owners such as this.

A harness should be used instead of a collar as that can cause his trachea to collapse. He may have difficulty maintaining a core body temperature. He’ll need to be protected from the elements if he’s too hot or cold, so you should get him doggie clothes. E.g. a shirt for inside and a warm vest for outside.

The dog is in a higher risk category for hypoglycemia so ensure that his nutrition is good and that his sugar levels don’t drop too low. If you own a Pomeranian, be extra vigilant with proper dental care. Brush his teeth every day and then give him a raw meaty bone to chew on.

Trauma is a distinct possibility for this small breed so if you plan to take him to the vet or anywhere else in your car, you need a properly certified dog seat. Watch any young children wanting to play with him. It’s your choice if you want your Pom sleeping in your bed but you may hurt him when you roll over or accidentally push him out of bed.

Pomeranians That are Bigger Than Normal

It’s not unusual to have a Pomeranian grow a bit bigger than the breed standard. Perhaps you want to ask …at what age does a Pomeranian stop growing? It’s a valid question when looking at over-sized dogs. The answer is that he could be 15 – 18 months old before growth stops.

You might wonder…how big do Pomeranians get? The answer is that he can weigh 10 – 13 lbs. and this simply means his bones are heavy set, a genetic trait that gets passed down through the generations.

If you have a Pomeranian that weighs 14 lbs.+, it could be:

People who buy a Pomeranian always have at least one good reason. One is to own a small (toy) dog. Many owners feel disappointed when they see their Pom gaining more weight than they expected.

You’ll easily be astounded as you watch your Pomeranian become much bigger than you anticipated. However, after that early surprise eases, you’ll quickly learn why it can be beneficial to have a dog that’s bigger and sturdier than you had planned initially.

They’re easier to look after, are less prone to accidents and injuries that might plague a smaller dog, and can handle some rough play without sulking or getting hurt.

If you are considering buying a Pomeranian puppy, always buy from a breeder with a good reputation. That will help ensure that the puppy you take home will weigh between 3 and 7 pounds. Ask to see his parents as that will help you see what he’ll look like as an adult.

When they’re born, Pomeranian puppies only weigh a few ounces. By the end of the second week, they double in size and keep growing quickly.
If you have a Pom litter, it’s essential to mark each one to prevent confusion if they have a similar color and look. Each day you should weigh them on a kitchen scale to confirm your Pomeranian’s weight is actually increasing each day.
Most of the puppy’s growth occurs within his first nine months of life. After that, he may gain a small amount of weight (perhaps a pound) and his height will increase for another three months, when he’ll be a full-grown Pomeranian.

Bear in mind that Pomeranian puppies normally have fast growth spurts from when they’re first born through to six months and the late bloomers may keep going until well after nine months of age.

A Pomeranian’s growth becomes much slower around the 10-month mark and once he is one year old, he’s close to, or at, his full size.

Generally, once a Pomeranian has his first birthday, that’s nearly the end of his growing phase. However, you may ask when do Pomeranians stop growing if he hasn’t stopped by that time.

Decades ago, champion Pomeranian breeders would typically own two sets of Pomeranian females. One set’s main purpose was breeding and the other group was for shows. The females that were amazing in shows generally were not useful for breeding. Sometimes they were too small for proper breeding, needing a C-section to give birth and often lacked the ability to nurture their own pups.

Because of this, many owners used larger females Poms as broods and bred them to the males that were show-sized in stature. The final result would be a litter of large and small puppies.

The bigger dogs looked homely while the smaller dogs in these litter were often top show quality. The bigger male pups usually were quickly sold to a pet owner. The small, pretty females generally got sold as show dogs or the breeder may opt to show the female dogs himself.

Breeders would often retain the bigger females and smaller males for their own future breeding program.

Some of the biggest winning Pomeranians have been bred from bigger than breed standard mothers. Breeders would rationalize the fact that the mothers, despite being oversized themselves, carried great bloodlines and could give birth to quality dogs if they were linebred to an ideal show size male Pomeranian.

This breeding program needs both inbreeding and linebreeding to produce quality dogs. As the overall size of the progeny produced start shrinking, you have to boost hybrid vigor by introducing fresh bloodlines to the breeding group.

During this process, you’ll produce stronger, bigger puppies…of which some will mature larger than show size requirements. Despite the bigger than breed standard size, (and assuming they have correct champion bloodlines), the females produced can be the canine machinery that will create future champions.

Many Pomeranian Books Mention The Merits of Breeding With Larger Females

Mrs E. Parker’s The Popular Pomeranian, published in 1930 talks about this practice in detail “My own preference would be for a bitch good enough to win at shows, but considered too big in the ring, i.e., one about 6 lbs. or slightly over in weight. From such a one I would expect the best results. For the present day brood bitch is frequently too small. All the famous dogs of the past, noted for their type, coat and soundness, were the progeny of large bitches. It is greatly to be feared that the existing deterioration in the qualities named is due entirely to the custom of breeding from small brood bitches.”

Mrs Parker’s offers more advice on selecting a breeding female ” My advice to the novice starting a kennel is not to breed from a bitch under 5lbs. weight. Even 3 or 4 lbs. over this weight will not be a disadvantage, providing her breeding is right and that she has a quality coat, and no serious fault.”

This is the Pomeranian by Louise Ziegler Spirer and Herbert F. Spirer mention the same subject ” Many breeders use larger bitches for breeding purposes to avoid trouble.”

From my own publication, The Pomeranian Handbook, ” In contrast to most dog breeds, the female Pomeranian is preferred to be larger than the male. Pomeranians experience their share of whelping difficulties. Breeding with larger females is encouraged in the hope of decreasing whelping complications.”

The Pomeranian Handbook by Denise Leo

How Old Is Your Pomeranian?

Tips On How To Buy Pomeranian Puppy Dogs

Are There Different Types of Pomeranian Dogs?