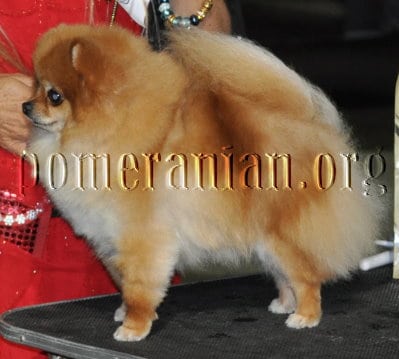 Owners and breeders should be aware of a health problem affecting a small selection of Pomeranians, namely a Chiari-like Malformation. The information supplied here is to help prevent this heartbreaking, debilitating disease to spread through the gene pool of Pomeranians any more than it already has.

UK Pomeranian breeders and owners will find helpful information on the Kennel Club. The Mate Select section of the Kennel Club’s website (in the Health Check section) is where you’ll find information regarding Pomeranians that have been checked. To access the information, you must have the complete, properly registered name of a Pomeranian but anybody can gain access to this database. You can check your Pom’s immediate ancestors and also the names of any stud dogs that may be on a list for consideration. The screened list contains 8 names at present.

Important advice for owners and breeders of Pomeranians:

• If a Pom shows clinical signs of SM, he must be examined by a vet and then referred on to be screened and graded under the KC/BVA scheme.

• If a Pomeranian is graded, breeding must be ruled out completely.

• All close relatives of a Pom that has received any grade except Clear (either for SM or CM) must be screened before breeding can even be considered OR the owner must decide never to breed the dog.

Although it may be viewed as commendable for owners whose dog(s) are NOT affected to still get screened, the Club acknowledges that a member may not be able to (or want to) do so because anesthesia is used (making it a risky procedure) and it’s also expensive to undertake. It’s strongly recommended that you study the information below and, if you own a Pomeranian that displays symptoms, talk to your vet and also suggest that SM and CM be explored as possible diagnoses. 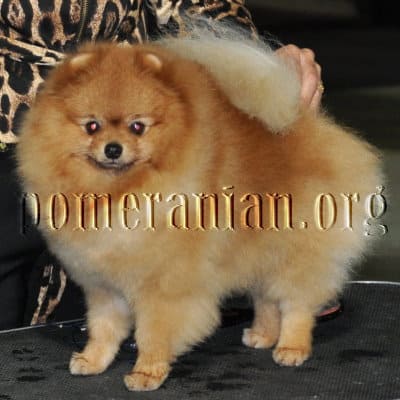 Syringomyelia (SM) is a very serious health problem where specific cavities inside the spinal cord close to his brain become filled with fluid. The nickname for this illness is “neck scratcher’s disease,” as a typical sign is where a dog scratches in the air close to his neck.

The rear half of a dog’s skull may not be big enough to contain the whole amount of the cerebellum. This may be too big as well, so it tries to squeeze through a hole at the skull’s rear (foramen magnum), and partly blocking the cerebrospinal fluid’s (CSF) normal flow down his spinal cord. This atypical CSF flow creates variable pressure and forms SM cavities (syrinx) in your dog’s spinal cord.

The good news is that SM is rare in the majority of dog breeds. However, it has become a common problem for Cavalier King Charles Spaniels, and has occurred in a few other breeds, especially in Toy breeds, and a few Pomeranians.

Unfortunately, as has happened in the Cavaliers, the SM/CM spread happens rapidly through a breed’s gene pool. Studies have demonstrated a link between the Chiari-like malformation (CM or CLM), which is also called Occipital Hypoplasia (OH), caudal occipital malformation syndrome (COMS) or Syringomyelia.

The spread and severity of Syringomyelia gets even worse in each new generation. SM/CM is a dog condition that occurs all around the world. It’s not limited by breed line, country or kennel and it’s believed by experts that this is a trait passed down from one generation to the next. 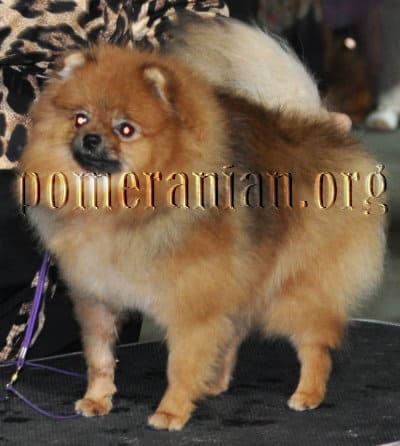 It’s uncommon to detect SM in new puppies because symptoms are rarely noticed prior to six months and may not happen for a number of years.

Pain is the most significant indicator of this problem. Symptoms can vary enormously but the most common first sign is that a dog will feel hypersensitive in his neck region, making him scratch his shoulders and neck uncontrollably.

The next symptom is severe pain around his neck, head and shoulders, making him scream or yelp. As this awful disease gets worse, it destroys parts of a dog’s spinal cord and becomes so incredibly painful that he may contort his neck and sleep and eat while holding his head high. His legs progressively get weaker so he’ll find it hard to walk. Lots of dogs even get to the point where they’re paralyzed.

If you own one or more Pomeranians and any of them display any of the abovementioned symptoms, talk to your vet and get the recommended health checks done. Nothing is more important than the health of your canine friends.

Does the Pomeranian and Cats Get Along?
← Previous
Pomeranian When He’s Scared Of Loud Noise. Pom Anxiety Attacks
Next →

We are a participant in the Amazon Services LLC Associates Program, an affiliate advertising program designed to provide a means for us to earn fees by linking to Amazon.com and affiliated sites.
286 shares