Information includes pictures of Pomeranian puppy colors, details of Pomeranian all colors and a Pomeranian colors chart. To clarify one element mentioned throughout; “Points” refers to: the Pom’s rims of the eyes, lips, nose and pads of the feet.

Details and Photos of Pomeranian Colors

A Beaver Pomeranian is a dilute brown. The beaver coat can range from orange-brown to beige-cream. A beaver colored Pomeranian are a deep taupe color with a silvery blue cast to the coat tips.

In older versions of the Breed Standard, this color was called “biscuit.” One stand-out feature is the pigment on the points and it’s a self-colored brown colour. A beaver color Pomeranian usually will have hazel eyes. If a dog has black points, dark eyes or black in his coat, he’s not Pomeranian beaver or brown.

The black Pomeranian possess a black undercoat and black guard hairs. Points must be black. 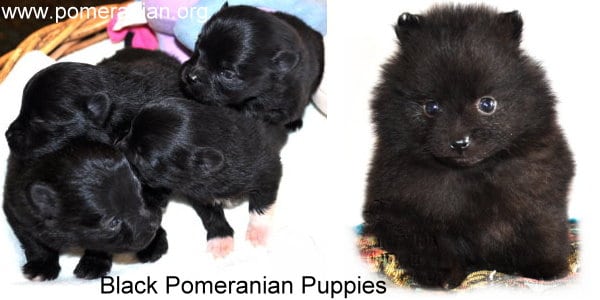 Blacks should be kept out of direct sunlight to avoid a reddish tinge developing on the coat. 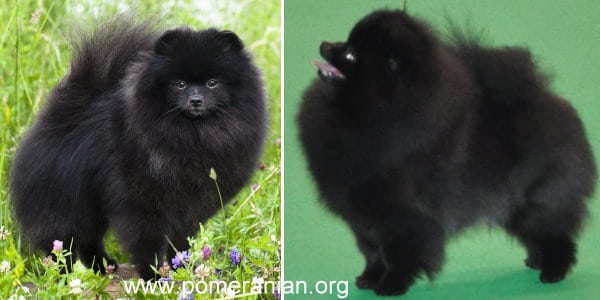 Black Pomeranians frequently will have a few white hairs in the coat. Typically on the chest or between the pads.

A Blue in the Pomeranian is a solid color. A blue Pomeranian dog will have light to dark grey guard hairs and a grey undercoat with a greyish blue hair or fur.

Some Blue Poms can be such a dark shade of blue, that may look black in certain light. Compare these dogs to a genuine example of the colors. At birth, Blue Pomeranian puppies are usually a silver color.
Some newborn blue’s may even appear to be black.Blue Pomeranian pups develop a silver/grey undercoat and a darker slate grey outer coat as they mature. Pomeranian blue are a diluted black and must have blue points (Eye rims, nose and pads ).
Blue Poms are usually the result of breeding blacks together.
In the event the coat is made up of any kind of additional colors the dog is appropriately termed as a parti-color, or tri-color Pomeranian.

In Pomeranian dog colors, brown is a very diverse color and ranges from the light beaver shade through to the darkest chocolate shade. 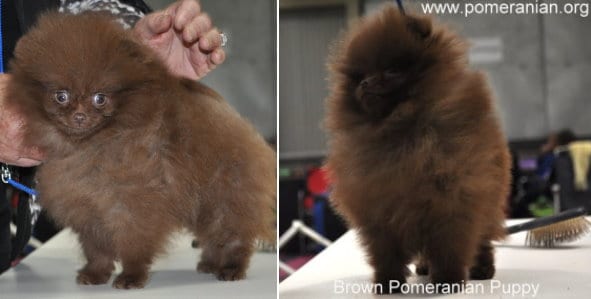 The chocolate Pomeranian color is rich and is fully self-coloured. Brown is more of a milk chocolate color and may sometimes have lighter shades.“Sunburning” or a reddening of the color can occur if the dog spends a lot of time outside. 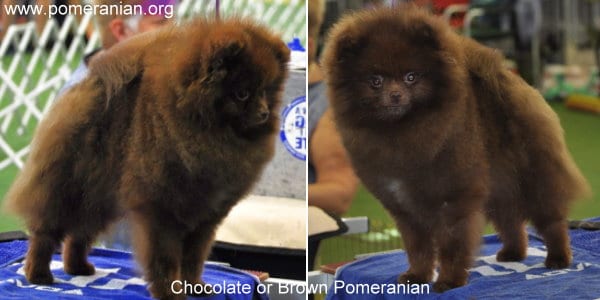 A Pomeranian Brown must have brown points and will,  like the beaver often have hazel eyes.

This Pomeranian color should be self-colored, with no white breechings. Because of the harsher texture of the guard hairs, the top coat may appear darker. 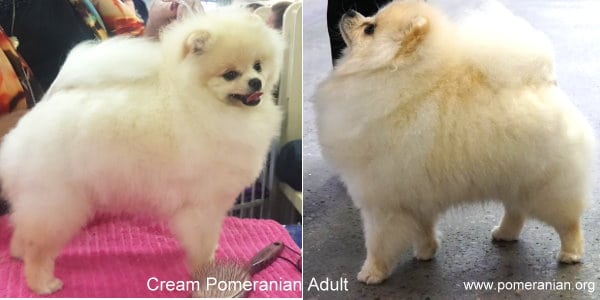 A cream Pomeranian must possess black eye rims, nose, lips and pads. The whiskers are usually white or a straw color. 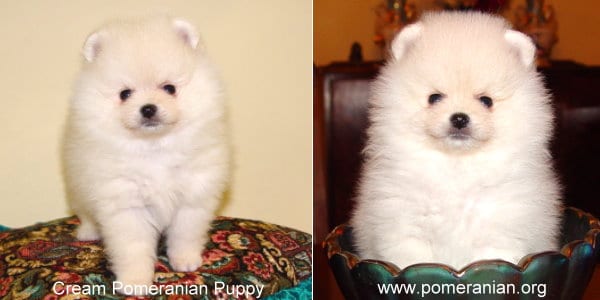 A cream colored Pomeranian puppy is typically white at birth. 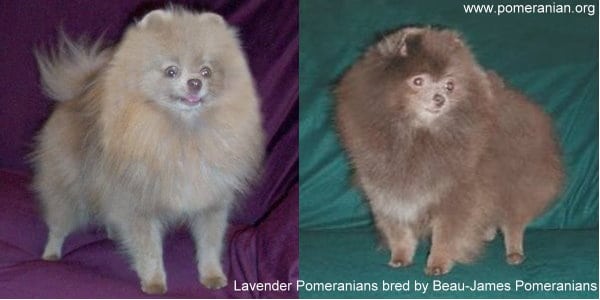 If you think of a grey colored Pom and add a small tinge of light purple, you’ll have this amazing color.
Lavender Pomeranians are often the result of breeding two dilutes, like a blue and a beaver together. Note this beautiful color is currently not AKC Pomeranian breed standard approved.

Breed Standards dictate that an Orange Pom must have black points the same as the red pom. An adult orange pom (phenotype) can be two genetic types (genotypes). The color of new Pomeranian puppies will show the genetic difference.

If the sable shadings do not fade, as an adult this would be an Sable Orange Pomeranian. Pet Pom owners often refer to Pomeranian colors tan being really an Orange.

In some cases, he’s born with no black hairs and is a clear bright colour at birth. The cause of this is puppy being homozygous for the orange gene. (Both of the genes at the locus have the allele for orange “ee.”) Homozygous orange poms can still range from being as dark as the red setter right through to the palest creamy-orange pom.

The points on the lighter coloured oranges may not be as dark as the poms with the sable gene. Pet owners often erroneously refer to these colored dogs as tan Pomeranians.

A red Pomeranian is a deep rusty red color and his points must be black.

Details of sable Pomeranian colors and sable color Pomeranian photos. One of the most popular Pomeranian orange sable A Pomeranians with a sable coat have at least three colors shaded along the coat. This shading must be as consistent as is possible with no areas of self-color.

Have black tips and red hues.

Have deep orange guard hairs with black tips and the undercoat is cream or light orange in color. An orange sable Pomeranian puppy is usually very dark at birth.

This color cream is usually a sooty silver as a newborn. The puppy coat is a silvery grey which is then a cream with often some sable tipping to the guard hairs. A cream sable Pomeranian will have black whiskers and points.

Sable colours won’t always show correctly in photos. Instead, the dog may look even a black or blue. You need to see the dog in person to experience the rich colours.

Beginner breeders sometimes mistakenly register a gray Pomeranian puppy as a wolf sable. Orange sable puppies often appear more grey than orange at six weeks. However, as they mature, the orange comes through.

Experienced breeders know to check behind the ears. The actual color of the hair behind a puppy’s ears is a reasonably accurate guide to the Pomeranian puppy’s adult coat colour.

A White Pomeranian, as a newborn Pom puppy is snow white in color with pink points. As the puppy ages the points should darken to black. An all white Pomeranian should be a solid white color, free from any lemon or cream shadings.

The three colours share the same tan marking pattern. Any solid colour or allowed pattern with tan or rust sharply defined, appearing above each eye and on muzzle, throat, and fore chest, on all legs and feet and below the tail. The richer the tan the more desirable. Tan markings should be readily visible.

As the name suggests, these are black colored Pomeranians with rust or tan marking. The undercoat’s base color will be lighter than the main colour and points will be black. If you have two dogs of the same quality, the rusty darker color is the preferred option.

This is generally called Chocolate & Tan and it covers all shades from the pale beaver with rust or tan right through to the darkest chocolate. The points will be brown and the shade will match that of the coat.

These poms have rust or tan and a blue colour. The points will be blue and match the coat’s shade.

Brindle is a pattern that has a base colour and striped overlays. The colour of the base can be: red, gold or orange and the brindle colour is strong black stripes. It may also be combined with other patterns on a dog’s coat; for example, black and tan or parti.

The points should match the base colour. Stripes may be thin or broad and may only appear on parts of the dog’s body or the entire width. Stripes on adult brindle Pom coats may appear to be broken owing to the length of an adult Pom’s coat. Brindles often have an extremely dark dorsal stripe.

A striping pattern caused by K(br), the dominant gene, is known as Brindle. Boxers routinely have this particular look, as well as various other dog breeds. It may be masked by a solid black self-color (K) but it’s dominant over (k), being non-self-colors.

The striping can sometimes combine with other canine patterns including: parti-color, black & tan (although the stripes will only be visible on the dog’s tan sections), and merle. However, the latter generally makes it difficult to see the merle so it’s unwise to blend these two together.

Parti-color Pomeranians are white with any other colour distributed in patches with a white blaze preferred on the head. Markings on the head should be symmetrical. Excessive ticking is regarded as a fault.

The points on parti-colored poms should match the colour of the patches. This means black, red, cream, orange, brindle parti poms, blue and red merle and sable colours should have black points. Blue sable and blue must have blue points. Brown merle, brown and beaver must have brown coloured points.

Parti colored Pomeranians seem to be the most intelligent, outgoing and active members of the Pomeranian dog world. If you have owned a parti-color Pomeranian you will never want any another color Pom dog to share your life. I probably should have reworded that statement to read; if you have ever been owned by a parti Pom.

White with patches of color on head and base of tail.

The piebald Pomeranian is white with patches of color on head, body, and base of tail.

This Pomeranian parti has color on the head and body with white legs, chest and collar.

Any Other Allowable Color

The Open Classes at specialty shows may be divided by color as follows: Open Red, Orange, Cream, and Sable; Open Black, Brown, and Blue; Open Any Other Color, Pattern, or Variation.

Pomeranian markings recognized by the AKC:

The AKC ( American Kennel Club ) Pomeranian Breed Standard ( approved July 12th, 2011: “ All colors, patterns and variations therof are allowed and must be judged on an equal basis.”

The U.K. Pomeranian Breed Standard ( updated April, 2017 : “All WHOLE colours permissible. In mixed classes where whole coloured and parti coloured Pomeranians compete together, the preference should, if in all other points they are equal, be given to the whole coloured specimens. Merles not permissible.”

Pom colors required are examples of  blue & tans, lilac Pomeranian, chocolate and tans, blues, blue sables, another adult merle, red sables, parti Pomeranian, irish parti-color and some of the rare Pomeranian colors are required.  Dogs and owners will be acknowledged as required.

A big thank you to all those who have helped with this education project on Pomeranian coat colors.

Learn All About Pomeranians in The Pomeranian Handbook