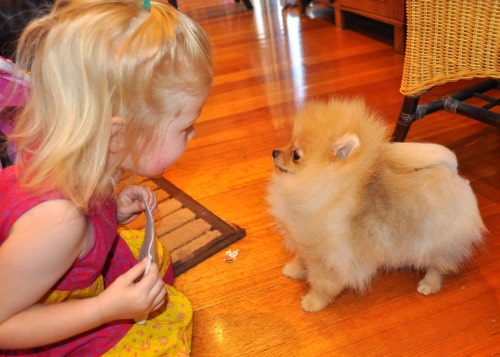 Most people confuse their dogs because they change vocal and visual cues used. The same visual cues could mean different things. Words can be used in varying contexts so it’s hardly surprising that dogs don’t go crazy trying to interpret what their owners want. However, dogs are intelligent (for the most part) so they manage to figure out what you’re trying to tell them. Make it easier for your dog to know what you want and he’ll love you for it.

he trouble with using body language is that what a human may think something means is actually different to the way a dog interprets it. Here are some guidelines you can follow to help with better communications: Never stare at your Pom. He thinks that’s a threat and if he’s about to bite, he may attack in what he sees as self-defence. Staring can also scare a dog to the point where he pees on himself or runs away to hide. You can look at a point near him but not directly at him.

Protect your Pomeranian from strangers who may approach him quickly. When strange dogs first meet, they tend to creep up sideways in a circular move so they can suss each other out. If a dog doesn’t do this are sending a message that they may possibly attack. If a person does this, they feel threatened. The dog may react in one of three ways: try to escape, hunker down or bite in an act of self-defence. If you see your pet is scared, amble up to him and stop with your side towards him.

If somebody wants to pet him, tell them to scratch under his chin. Patting on the back or head is regarded as being dominant. A dominant dog would do that to one that’s submissive. If you have a submissive dog, scratching under his chin is the best way and he’ll like it as well. 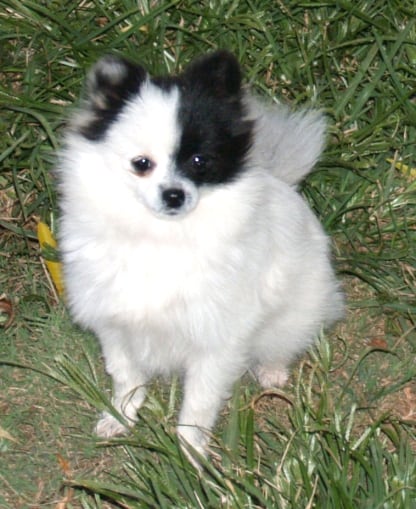 If you want to make your dog follow you, turn your back on him and walk, while calling his name. To make him stop, face him (making you seem big) and take one or two steps in his direction. A dog views you walking towards him as a message to follow in that direction while keeping out of your way. A dominant wolf behaves this way when leading his pack.

It’s common for a person to call a dog while facing him…and then get annoyed when the dog walks away. He’s only doing what you told him to do. Don’t hug your pet. Dogs don’t hug each other. The only similar behaviour is when they hump and the one on the bottom doesn’t like it. So he sees a hug as being dominant and tries to squirm out of it.

Give verbal commands correctly to your Pomeranian.

It’s normal to talk to your dog and it would be odd if you didn’t. However, your constant babbling may be confusing. Also, as he turns his head and seems to listen, he’s only really trying to hear words that actually mean something to him such as: eat, walk, food, treats, etc. How you talk to your dog is just as vital as what you say. Your volume, tone and language are all key elements so remember these points to be an effective communicator: Choose a single word for each command and then stick with that word. If you want your pom to come to you when you call, just say “come.” Don’t use variations such as: come here, here boy, over here, here and various other options. Choose one word and only use that word, even in training, until you have him obeying you easily. Choose words that are unique. Don’t use similar words for more than one command or your dog will get confused. If your pet’s name is Sid, don’t use “sit” because it’s easy to get the two confused. Some people use a foreign language which makes it a bit of fun. 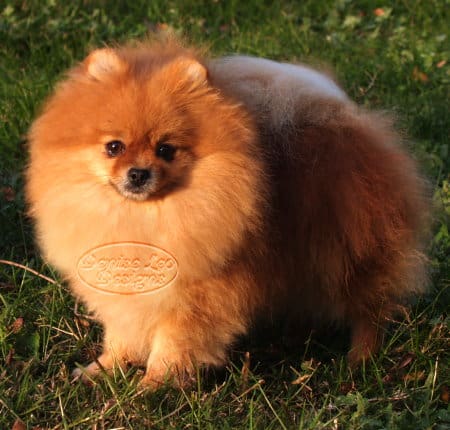 You need to be consistent with the sound of the command as well as the word itself. Dogs are more in tune with sounds so keep your voice steady.

Never yell because he has much sharper hearing than you do. Yelling may frighten him (unless he’s a long way from you, perhaps off his leash in a dog park). If you want to tell him off for something, use a low tone because it indicates leadership, aggression and power. Most species use low tones, often as threats. They make the animal being scolded stop and listen. If your dog is about to run into the path of a car, the word STOP! in a low, but loud, tone will make him stop dead in his tracks. A high-pitched tone denotes playfulness. The dog will feel happy and ready to play. People speak to dogs much like they do to babies because it’s not a threatening tone and it’s easy to ignore if the pet or baby is stubborn. Think about rhythm of what you say. It’s natural for people to alter their cadence to get the response they desire. These are just a few examples: • A low tone that’s abrupt will stop your dog from doing whatever he’s doing. • A set of short, high-pitched, repeated sounds that keep rising higher in pitch usually makes your dog go faster. • A monotonous, long talk calms or slows your pet down. If you want him to come running to you, say “go, go, go, go, go, go in short bursts. Once he is there, say noooo in a low tone to stop him. Then draw out the words “settle down” to calm him.

Learning to understand your Pomeranian.

While you teach your dog how to understand you, it’s also essential that you put effort into learning what he means by the different things he does and the sounds he makes. He doesn’t speak English so you have to be smarter when working out what he means.

Take your time and learn properly. Observe your dog doing all the things he normally does. Watch how other dogs behave as well. Then watch how your dog interacts with other dogs. You’ll quickly notice numerous facial expressions and body language. Piecing it all together will take time but it’s time well spent because your bond will grow stronger as you learn more about how to communicate with your beloved pet. Eventually it will all become second nature. Listening is another aspect but I’ll cover that shortly.

The language of Pomeranians. 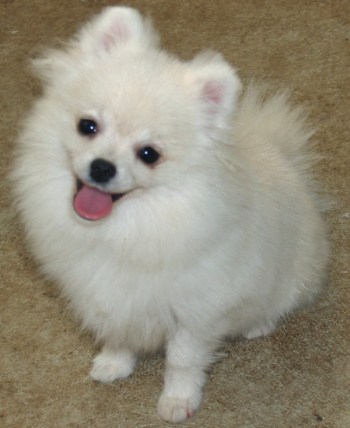 Every movement has a meaning so get to know these to start with.

• Stands with stiff legs while leaning forward: aggression or dominance.

• Lowering his head or crouching down: submission, anxiety or fear.

• Lowering the body, twisting his head to one side, especially if he’s crouching: submission.

• Lowering his front end until his elbows touch the floor while his butt is waving in the air: he’s feeling playful.

• Rolls onto his back: depending on the situation, this may be fear or submission…or it may simply be that he wants a tummy rub.

• Rolls around while lying on his back: He’s having fun!

• Putting his head or a paw on the back of another dog: trying to dominate. • Slams into another dog with his hip or body: playfully dominant. • Turning his head away: truce or submission.

Make him turn away before trouble starts.

Dogs don’t just bark. They also howl, growl, hum, pant, yip, whine and sneeze. Each sound has a different meaning. New owners are often worried if their dog growls like a tiger. However, that’s just part of their language and can mean different things. When he growls, don’t berate him. Listen to see if you can decipher what he’s saying. 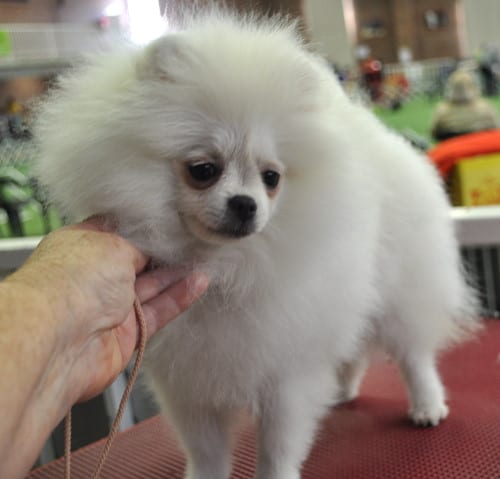 A yip or single brief bark: he’s demanding something.

He may want food, to play, to go for a walk or something else.

• One low-pitched bark: stay away from him.

• A single low-pitched bark A warning to stay away

• One soft bark: he wants you to play with him or it’s an uncertain warning.

• A low growl: warns another subordinate dog to stay away. That’s ok but not if he growls at you.

• A low growl combined with some yips: could also warn an equal to go away but not acceptable if he’s doing it to you.

We are a participant in the Amazon Services LLC Associates Program, an affiliate advertising program designed to provide a means for us to earn fees by linking to Amazon.com and affiliated sites.
254 shares